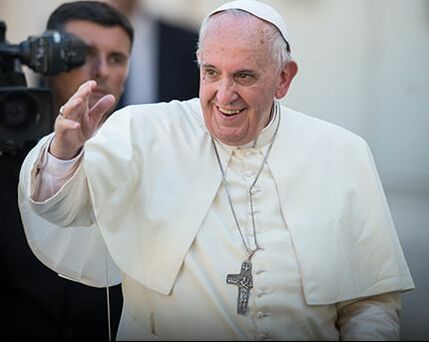 
Catechesis on the Letter to the Galatians: 12. Freedom is realised in love

These days we are talking about the freedom of faith, listening to the Letter to the Galatians. But I was reminded of what Jesus said about the spontaneity and freedom of children, when this child had the freedom to approach and move around as if he were at home... And Jesus tells us: “You too, if you do not behave like children,  will not enter the Kingdom of Heaven”. The courage to approach the Lord, to be open to the Lord,  to not fear the Lord: I thank this child for the lesson he has given us all. And may the Lord help him in his limitation, in his growth, because he has given this testimony that came from his heart. Children do not have an automatic translator from the heart to life: the heart takes the lead.

With his letter to the Galatians, the Apostle Paul gradually introduces us to the great novelty of faith. Slowly. It is truly a great novelty because it does not merely renew a few aspects of life, but rather it leads us into that “new life” that we  received with Baptism. There the greatest gift, that of being children of God, was poured  upon us. Reborn in Christ, we passed from a religiosity made up of precepts   to a living faith, which has its centre in communion with God and with our brothers and sisters, that is, in love. We have passed from the slavery of fear and sin to the freedom of God’s children. Here, again, is the word freedom.

Today we will try to better understand what the heart of this freedom is for the Apostle. Paul states that it is anything but an “opportunity for the flesh” (Gal 5:13): freedom, therefore, is not a libertine way of living, according to the flesh or according to  instincts, individual desires or one’s own selfish impulses;  on the contrary, the freedom of Jesus leads us to be, the Apostle writes, “servants of one another” (ibid.). But is this slavery? Yes, freedom in Christ has an element of slavery, a dimension that leads us to service, to living for others. True freedom, in other words, is fully expressed in love. Yet again, we find ourselves faced with the paradox of the Gospel: we are free in serving, not in doing whatever we want. We are free in serving, and freedom comes from there; we find ourselves fully to the extent to which we give ourselves. We find ourselves fully to the extent to which we give ourselves, to which we have the courage to give ourselves; we possess life if we lose it (cf. Mk 8:35). This is pure Gospel.

But how can this paradox be explained? The Apostle’s answer is as simple as it is demanding: “through love” (Gal 5:13). There is no freedom without love. The selfish freedom of doing what I want is not freedom, because it turns in on itself, it is not fruitful. It is Christ’s love that has freed us and it is love that also frees us from the worst slavery, that of the self; therefore, freedom increases with love. But beware: not with self-indulgent love, with the love of  soap operas, not with the passion that simply seeks what we want and like, but with the love we see in Christ, charity: this is the love that is truly free and freeing. It is the love that shines  in gratuitous service, modelled on that of Jesus, who washes the feet of his disciples and says: “I have given you an example, that you also should do as I have done to you” (Jn 13:15). Serving one another.

Therefore, for Paul freedom is not “doing what you want and what you like”. This type of freedom, without a goal and without points of reference, would be an empty freedom, a freedom of the circus: it is not good. And indeed, it leaves emptiness within: how often, after following instinct alone, do we realise that we are left with a great emptiness inside and that we have used badly the treasure of our freedom, the beauty of being able to choose true goodness for ourselves and for others. Only this freedom is complete, concrete, and inserts us into real everyday life. True freedom always frees us, whereas when we exercise that freedom of “what we like and do not like”, we remain empty, in the end.

In another letter, the First to the Corinthians, the Apostle responds to those who supported an incorrect idea of freedom. “All things are lawful”, they say. Yes, “but not all things are helpful”, Paul replies. “All things are lawful, but not all things build up”, the Apostle answers. He then adds: “Let no one seek his own good, but the good of his neighbour” (1 Cor 10:23-24). This is the rule for unmasking any type of selfish freedom.  Paul puts   the need for love even before those who are tempted to reduce freedom only to their own tastes. Freedom guided by love is the only one that sets others and ourselves free, that knows how to listen without imposing, that knows how to love without coercing, that builds and does not destroy, that does not exploit others for its own convenience and does good without seeking its own benefit. In short, if freedom is not at the service — this is the test —  if freedom is not at the service of good, it runs the risk of being barren and not bearing fruit. On the other hand, freedom inspired by love leads towards the poor, recognising the face of Christ in their faces. Therefore, this service to one another allows Paul, writing to the Galatians, to emphasise something that is by no means secondary: thus, speaking of the freedom that the other Apostles gave him to evangelise, he underlines that they recommended only one thing: to remember the poor (cf. Gal 2:10). This  is interesting. When, following that ideological battle between Paul and the Apostles, they came to an agreement, what did the Apostles say to him?: “Go ahead, go ahead and do not forget the poor”, that is, may your freedom as a preacher be a freedom at the service of others, not for yourself, to do as you please.

We know, however, that one of the most widespread modern conceptions of freedom is this: “my freedom ends where yours begins”. But here the relationship is missing! It is an individualistic vision. Instead, those who  received the gift of freedom brought about by Jesus cannot think that freedom consists in keeping away from others, seeing them as a nuisance; they cannot regard  human beings  as cooped up in themselves, but always as part of a community. The social dimension is fundamental for Christians, and it enables them to look to the common good and not to private interest.

Especially in this  moment in history, we need to rediscover the communitarian, not individualistic, dimension of freedom: the pandemic has taught us that we need each other, but it is not enough to know this; we need to choose it in a tangible way, every day, to decide on that path. Let us say and believe that others are not an obstacle to my freedom, but rather they are the possibility to fully realise it. Because our freedom is born from God’s love and grows in charity.