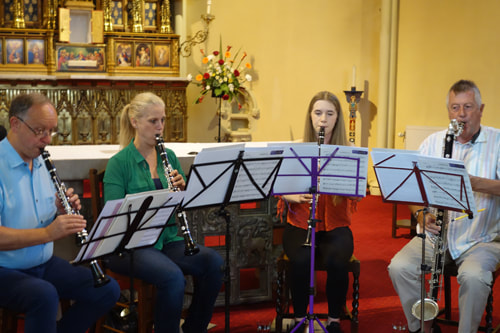 On Saturday 6th July an audience gathered in the church for a short concert by four clarinettists from the Orchestra of St John, Alastair Moseley, Kay Mellor, Megan Guest, and Bob Porter. They played a range of mostly well-known pieces with a predominantly Jazz focus.

The quality of the musicianship was high, the acoustics in the church were very good, and the audience received the performance with enthusiasm. Few present will have seen a bass clarinet before. In all, the concert was a great success and one which will hopefully lead to further concerts in the not too distant future and certainly as part of the Bromsgrove Festival next year.
Music played on the Church Organ
Two more pieces played by Michael Jones on the Parish Organ - Elgar's Chanson de Nuit and Alec Rowley's Benedictus